Life changes very quickly, doesn’t it?  In my lifetime not only have products changed but life itself. The way people think and act, people’s social environment and above all- technology.  BUT there are some things that will never change, and that is people are still human. They still live in a climate of other human beings and there needs to be inter communication between them within this environment therefore still lies the need to express a point of view, an opinion i.e. The ancient art of persuasion.

The majority of people would never regard themselves as sales people or persuaders and yet, when you argue with a partner, the first task is to argue your case.” It was not your fault “. In a nightclub if you “chat up” a person of the opposite sex, you use your powers of persuasion. If you have a complaint in a restaurant or retail establishment, you put forward the reasons for your complaint and the result you require. Even the religious and political protesters are attempting to change the thinking of others.  All these can be included in a broad sense as “selling” your side of the argument. In summary, persuading others that your opinion is correct.

In the professional world, the law is a leading advocate of persuasion. Solicitors, lawyers, barristers all continually attempt to influence others in their defence or prosecution of a client.  Nowhere more emphatically than in the world of politics is this art of persuasion more clearly demonstrated. Through the media or door to door, the politicians try to convince the electorate that their policies are the best. In the national elections, the persuasive skills of each politician to reach his constituents and influence them to vote for him is communication at the most basic level. The whole world revolves around “selling” and all of us participate in various degrees.

It is interesting that as we ascend the ladder of professional persuasion, the status as perceived by the general mass descends the ladder. Disputes between individuals is always acceptable, the law is regarded with more scepticism, whilst politicians are often viewed with often sheer contempt. The bottom rung however lies with the occupation actually bearing the word salesman. Over the years from the most often referred to “commercial traveller”, the salesman has been regarded as of low breed, low intellect, boisterous, bully, with the “gift of the gab” and certainly a person to be ignored.  I have an aim to completely disprove that image and hopefully prove that the sales person is an extremely professional, highly intellectual individual; a person who listens and a successful one who has the client’s needs uppermost. Selling is an essential and absolutely necessary function in the greater prosperity of this country. All trade and communication involves the art of selling (persuasion).

Technology has possibly been the one element that has created the most change within the selling industry. Today items are bought and sold by the internet, meetings conducted via video conference facilities, the mobile phone has brought mass text broadcasting, the web sites are common place and who would doubt the influence of the e mail. Some of these we will discuss later since they are important facets of the modern sales person but the one basic ingredient even now still remains the human element.

The human being in whatever capacity controls the progress of the world. The automation of the planet has not taken place, and neither the robot nor the computer has replaced the human brain. The human still makes decisions at all levels of society and in the basic art of persuasion, it is the fight for total understanding of another’s thought process that is still found to be the most difficult and complex skill of the successful salesman. Despite all the changes of history, the ever increasing dominance of technology and the billions of papers advocating differing methods to win the minds of others, the art of intelligent persuasion still remains a mystery.  However there are many words of advice and wisdom learned over the years and these go a long way to helping the successful salesman manipulate his way through the maze towards a sale. One must remember that the human mind belongs to a unique human being and the method of communication between two minds will always hold the key to successful selling and the progress of world development. 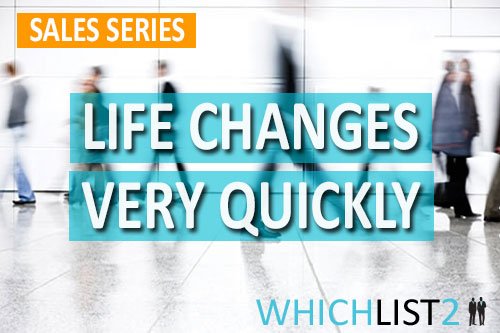 About the Author: Tony Wainwright

Over 46 years in Sales, Marketing and Communication, I have occupied most roles in Sales / Marketing including over 26 years in the list supply industry commencing with D&B and running my own company for 24 of those years. List Knowledge, Common Sense, Honesty and a practical understanding of all Sales techniques are my major strengths plus knowledge of most list sources